15
Sunarto, the Village Banker
19
Successful Targeting of the Social Media Market Sees a Multiple Rise in Turnover
15
WHEN HARD WORK RESULTS IN SUCCESS
01
Andika Caem’s Onde-Onde: From Just A Favorite Snack to A Livelihood
15
GETTING THE BTPN ‘TOUCH’
31
TWILIGHT YEARS SPENT IN HAPPINESS FOR SUBANDI
15 September 2015
No posts in archive.

GETTING THE BTPN ‘TOUCH’ 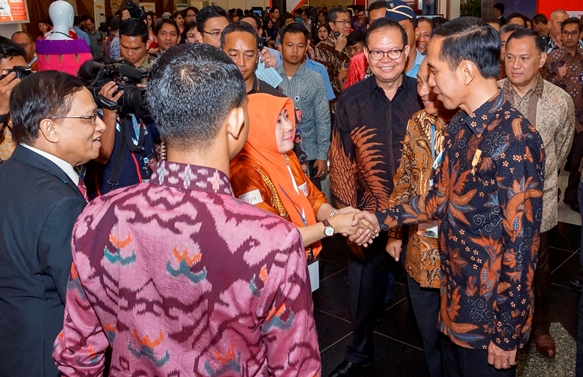 Family businesses, small businesses or side activities - in the past largely seen as pastimes – are now productive, profit-generating enterprises. All thanks to the BTPN Daya program.

Indonesian President Joko Widodo – popularly known as Jokowi – made an impromptu visit to the 2015 Indonesia Banking Expo (Ibex), at the Jakarta Convention Center (JCC) on Wednesday, September 10, 2015. While there, he stopped right in front of the Bank Tabungan Pensiunan Nasional (BTPN) booth. Sigit Pramono, Chairman of the National Commercial Banks Association (Perbanas), and Maryono, President Director of Bank Tabungan Negara (BTN) and also Chairman of the Ibex 2015 Steering Committee, who were accompanying the President’s entourage, also came to a stop.

“Pak Jokowi, do you still remember me or not?” chirped a woman with a thick Javanese accent.

Straining his memory with a small frown, Jokowi studied the face of the lady wearing the light brown veil, and before long his face broke into a smile. “It's you Ery, hey,” Jokowi responded, taking the hand of 54 year-old Yulia Ery Tertiana.

“Yes, Mr President,” answered Ery, as she is commonly called. As it turned out, Ery and Jokowi were in the same year at the school SMA Negeri 6 in Solo, Central Java.

After this brief unanticipated reunion and, of course, not forgetting the obligatory selfie— at the request of Ery, Jokowi went on to conclude his visit to Indonesia’s biggest banking innovations exhibition, which was held from 10-12 September 2015. Ery, meanwhile, returned to her stand, the BTPN booth, to look after her merchandise, including various souvenirs made from copper, such as Javanese daggers (keris), miniature bicycles and tricycles (becak), as well as numerous other trinkets.

“I was in the same year as Jokowi in 1980, but we were in different classes,” said Ery with an air of pride. She had in fact been busy been answering a stream of comments from her Facebook friends ever since uploading the photo “Surprise Reunion with Jokowi” to her social media account.

Ery had never imagined in her wildest dreams that she would meet her ex-schoolmate Jokowi again and get to take a selfie with him. The President was at the event - which is attended by the banking industry, as well as numerous IT vendors and telecommunications companies - to deliver a keynote speech.

Ery was one of 11 richly deserving BTPN customers invited to attend Ibex 2015. These 11 customers from various regions each brought their own wares. Ery, for example, brought a number of keris and miniature bicycles and tricycles, from her hometown of Solo.

As a bank which focuses on the mass market segment, BTPN has been happy to have Ery as a customer since 2007. In this time, the family business handed down to her has expanded, from its principle item of manufacture,keris, to the production and selling of other goods such as miniatures.

“BTPN has provided us with some great business coaching,” explained the lady, who was born in Solo on July 15, 1961. To date, she has opened three souvenir kiosks at Pusat Cenderamata (Souvenir Centre) Alun-Alun Solo Utara, Block D-E-F. Impressively, her business turnover has reached Rp 25 million per month.

Alongside Ery at the exhibition, and another customer to benefit from BTPN’s training and mentoring, was H. Rumindah, a craftsman working with Sasaksongket (traditional woven fabric). This skilled artisan, who was born in Central Lombok on December 31, 1952,  brought to Ibex 2015 various examples of the exquisite songket native to Lombok. Rumindah’s flagship product is the Songket with a motif known as “Subahnale”.

Although still turning over between just Rp 5-10 million per month, Rumindah concedes that he is proud and happy to be productive at his age – he will be 63 in December. Initially, his fabric making business was little more than a side activity, as is the case for most residents of his area. In his village, making woven fabric is part of the heritage, handed down through generations as something to be done when not out in the fields.

After retiring as a civil servant in January 2013, Rumindah’s fabric weaving activities remained rather perfunctory. This was despite the fact that, from 2009 to 2012, his village had become part of the Bank Indonesia (BI) assisted village program, especially for weaving as well as raising cattle and goats.

A former Head of the Department of City Planning, West Lombok, Rumindah chose BTPN to safeguard his pension funds, a decision which changed the course of his life. As it does for many small-scale entrepreneurs, BTPN paid Rumindah a lot of attention, encouraging him to pursue a business that had hitherto been more of a pastime.

“It felt great to have an institution that cared about me. BTPN really helped with the development of my business, including with the selling of my fabric. I was really motivated to make a serious effort,” said a clearly grateful Rumindah. “Even coming here to Ibex 2015 didn’t cost me anything - everything was taken care of by BTPN,” he added with obvious emotion, his eyes glazing over with tears.

It’s not only Rumindah and Ery who have benefited from BTPN. Plenty of other customers have experienced the BTPN ‘touch’ – a show of support, appreciation, and respect. For example, also in attendance at Ibex 2015, was Taryat, a chocolate cake maker from Ciomas, Bogor; H. Tabroni, a candied fruit maker from Cirebon; Basrial Bahar, a songket craftsman from Sawahlunto, West Sumatra; and members of the Cirebon batik community from various regions. They too had felt the “touch" from BTPN through its successful Daya program - which seeks to empower the mass market in a measured and sustainable fashion. (*)