15
Sunarto, the Village Banker
19
Successful Targeting of the Social Media Market Sees a Multiple Rise in Turnover
15
WHEN HARD WORK RESULTS IN SUCCESS
01
Andika Caem’s Onde-Onde: From Just A Favorite Snack to A Livelihood
15
GETTING THE BTPN ‘TOUCH’
31
TWILIGHT YEARS SPENT IN HAPPINESS FOR SUBANDI
31 July 2015
No posts in archive. 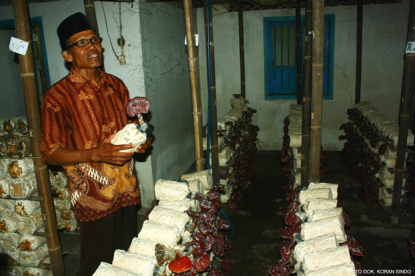 Nobody wants to become old and helpless. As such, BTPN Purna Bakti is seeking to give much needed hope to pensioners so that they can enjoy their twilight years in happiness and fulfillment.

SUBANDI (63) simply cannot contain his emotion when remembering that fateful day, eight years ago. In fact, he remembers it especially well - it was a Wednesday in July 2007.  Being a public servant for 55 years on the Regional Financial Management Board (BPKD) of Kulon Progo Regency, Yogyakarta,  Subandi eventually had reached the end of his service days and got to  leave his job. It was not easy for Subandi, but he had no choice but to let go of it all; his wonderful office, his co-workers who had become like family and, of course, the warmth which he'd been accustomed for so many years. "That was the day I officially retired," he recalls, softly.

At that time, a feeling of immense sadness pervaded Subandi's heart. An utterly natural reaction as he had spent most of his life as a productive and dedicated civil servant (PNS). The thought of sudden vacuum days had brought him the fear of suffering post power syndrome as well as the agony of feeling useless. "I'm retiring," he muttered, as if trying to convince himself it wasn't true.

Fortunately, Subandi was not the type to wallow in sadness. Approaching his sixties, he got himself back together and put a wiser perspective towards his twilight years: retiring does not mean the end of everything. In fact, it can be the beginning of an intriguing new period of life. Therefore Subandi pointed out his next "field of service" after retirement, and decided to become a mushroom farmer, cultivating various varieties of funghi in Kulon Progo.

Driven by a high spirit and a big heart, Subandi’s mushroom business begin to spike up.  He noticed the need to brand his business with a unique name. One word that constantly came to mind was "Julira", a name that is dearly close to his heart.

"The word is an abbreviation of July and Wednesday (Juli andRabu). It was the day and month I officially retired," he remarked, thoughtfully.

By working on his mushroom cultivation business, Subandi  is not only getting more productive, but he is also able to maintain his physical health, as well as generating sizeable income for his family . "There are many ways to spend your retirement. I chose to stay productive, as I believe that it is the key to live a healthy and prosperous senior days," he continued.

Now, with Julira, Subandi is enjoying his twilight years with pride and happiness. Furthermore Subandi humbly acknowledged that PT Bank Tabungan Pensiuan Nasional Tbk (BTPN) has played a significant role behind the success of Julira.

Through BTPN Purna Bakti, BTPN business unit that focuses on serving pensioners, Subandi do not merely get access towards capital financing services, but he is also able to grow his capacity through BTPN’s Daya Program.

With over 55 years worth of experience in serving retirees, BTPN understands that pensioners not only require quick and easy financial services, but also have a great need to remain healthy and prosperous. Thus, BTPN offers the Daya program to its customers, including its retiree customers. Daya is a measured and sustainable mass market empowerment program, which BTPN provides training and information on a regular basis to enhance the capacities of its customers, thereby offering them a chance to grow as well as opportunities to improve their lives.

Daya does not only enable BTPN’s customer to access knowledge and information, yet it is also promote its thriving customers to share their knowledge and experience. In June 2015 Subandi got the chance to share his business tips to his fellow pensioners.  Held at his house in Kulon Progo, Subandi taught and show how to start the mushroom cultivation business to more than 30 pensioner customers of BTPN Purna Bakti.

In that occasion, Hari Suseno - Regional Government Head of BTPN Purna Bakti for the Central Java region said "We realized that in order to remain productive and prosperous after retiring, customers need more than just access to finance, but they also need trainings and guidance to grow their capacities and reach their full potential."

Regarding to the activity, Hari believed that this activity is very effective to promote pensioners’ capacity and  drive to stay productive, since they can relate so much with most of Subandi’s stories and struggles. The age similarity has made them  share the same perspectives and outlook in life. As such, I'm sure it was inspiring for these customers to see that they too have the capacity to become successful entrepreneurs," Hari continued.

“ Daya program is held on a regular basis in all of  BTPN’s operational areas. We are also actively inviting  other parties to participate and share their expertise and success stories. " Hari concluded. (*)