15
Sunarto, the Village Banker
19
Successful Targeting of the Social Media Market Sees a Multiple Rise in Turnover
15
WHEN HARD WORK RESULTS IN SUCCESS
01
Andika Caem’s Onde-Onde: From Just A Favorite Snack to A Livelihood
15
GETTING THE BTPN ‘TOUCH’
31
TWILIGHT YEARS SPENT IN HAPPINESS FOR SUBANDI
15 December 2017
No posts in archive. 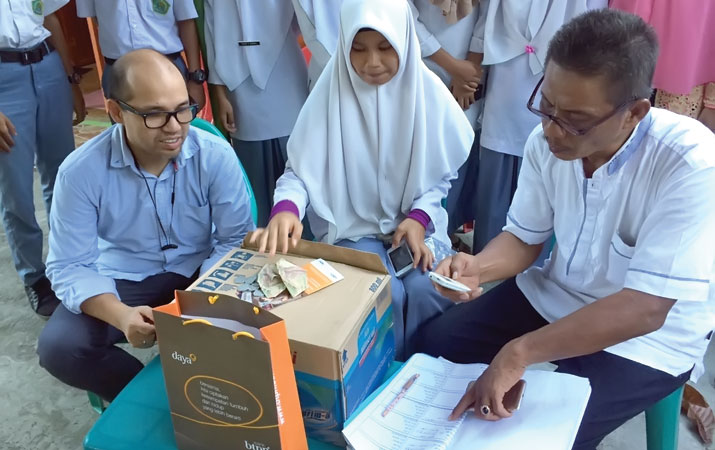 The branchless banking program has changed everything. Back then, we could only meet bankers at banks. However today it is changed. We can easily find a banker next door, serving transactions just like any other bankers from opening an account, saving, transfer, cash withdrawal and other services.

Sunarto, a 50-year-old man, has been doing this every single day since August 2016. Living on Jl. Mawar Blok J No. 11 Kwala Begumit, Langkat Regency, North Sumatra, he regularly serves his neighbors who want to save money. The amount varies from Rp 10,000 to Rp 20,000.

He is doing his “banking service” as the BTPN Wow! agent apart from his permanent job as a teacher at the MAN 1 Stabat state Islamic high school. Sunarto has gained more than 2,000 customers since 2016. All his customers are his neighbors, his students and their families.

“I have experience the difficulties of changing the people’s mindset to start saving, even save their small changes,” said Sunarto on Wednesday (6/12). Without any banking sector background, it was difficult for Sunarto to educate the people on banking services. However, his hard work has slowly been paid off. He could earn Rp 2.5 million per month from being a BTPN Wow! agent.

“It was really hard in the beginning. My wife had even thought that I would collateralize our house to the bank. But it was not the case. Persuading people to start saving is difficult too, especially small changes. They suspect I will deceive them and they think the bank is illegitimate,” he said, accompanied by his wife Istian.

But Sunarto has been serious in doing his banking services. From that, he could perform umrah. He is grateful. His neighbors also welcome him well.

“I’m happy. Back then we had to go to the nearest town to transfer money and queued in the bank. Now, I only need to go to his house day or night without having to line up,” said neighbor and customer kata Juliani Siregar.

Mohammad Reza Rizal, BTPN Executive Vice President Sales Management Head, said the program was an implementation from the Financial Services Authority (OJK). From this program, the bank has recruited around 200,000 agents nationwide with customers reaching 4.3 million. North Sumatra ranks fourth in the country.

“Sunarto is one of the best agents in Indonesia. He has unique stories – he is a teacher who can gain 2,000 customers within a year and 80 percent of them are active customers,” he said, adding that the number of customers in the province’s seven municipalities/regencies has reached 57,000.

Reza hoped that villagers would have closer relationship with banks through this service. He did not set any target on third party fund collection or other services. He only hoped villagers would continue actively save money and get better services through their BTPN Wow! agents.